April 2018 – The Las Olas Boulevard Six-month Safety Improvements Demonstration Project is part of an overall Community Investment Plan that includes safety and traffic calming improvements within the Colee Hammock neighborhood, and additional safety and traffic flow improvements along S.E. 15th Avenue. The goal of the Las Olas Boulevard Demonstration Project is to create a safer connection for everyone traveling on the Boulevard, regardless of travel mode, while balancing the needs of our neighbors, business owners, and guests.

How is the new roadway safer for all users of Las Olas Boulevard, including those who drive, share a ride, people walking, people biking and people making deliveries?

For those who drive

For those who walk

For those who bike 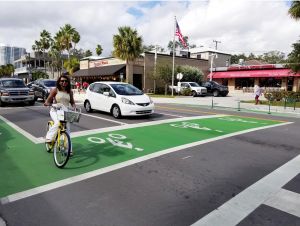 For those sharing a ride and making deliveries

What will happen at the end of the six-month demonstration period?

At the conclusion of the safety improvements demonstration project, an evaluation report along with recommendations for next steps will be presented to the City Commission this summer for consideration. (Estimated July 2018)